The site Färgaren in Kristianstad is a former dry cleaning facility operated 1906-1988 and it is considered to be one of the worst contaminated sites in Scania. The ground is heavily contaminated with PCE and degradation products. The site is situated over one of Sweden’s largest aquifers used for drinking water supply and food industry, and thus constituting a high risk. The site is thoroughly investigated both by drillings, water and soil samples, CSIA analyses test pumping and with 3D DCIP, i.e. the baseline and knowledge of the site is excellent. The task for this project would be to follow through the cleaning procedure and see if DCIP/PBGC/CSIA methodology is possible and from here assess and recommend an optimised remediation monitoring methodology. The site was in 2015 granted 46.5 MSEK by SEPA for a remediation campaign during 2016 and 2017. The remediation will be based on a thermal in-situ remediation method.

The Hagfors site is contaminated with 10s of tons PCE from an old dry cleaner. It is a former FFV site where SGU today is the principle responsible for the clean-up. The PCE and its metabolites exist as a large (800 m x 100 m at 20 m deep) contaminant plume within silt and sand resting upon more permeable sand and gravel deposited on bedrock. There are free phase pools of PCE on the bedrock and PCE discharges within a brook downstream the site with a few hundred kilograms of undegraded PCE leaking out each year. A pilot test for remediation has been carried out in a small area. The test performed was in a small part of the contaminant plume based on soil mixing of zero valent iron into bentonite clay with full scale machines to enhance PCE degradation and to evaluate the effect on geotechnical stability. This site gives the opportunity to set the baseline of the contaminant situation within the larger non-treated part of the zone, as well as to monitor and investigate the degradation of PCE and behavior of the zero valent iron within the pilot test area.

The site in Alingsås is also a dry cleaning facility but unlike the other MIRACHL sites, the facility is still under operation. The responsibility for the planned remediation is shared between the Swedish geological survey, SGU, and the county council, Västra Götalandsregionen. Currently, a conceptual model of the contamination and the geology has been established by a consultant, WSP. During the summer of 2017 biotraps have been collecting data from the subsurface and a pilot test is planned to take place during the autumn of 2017. The pilot test will be performed by WSP as a split injection with two separate fluids. MIRACHL will be monitoring the entire test by doing time lapse measurements of geological, physical and biological variables. By using an automated array of 4 DCIP layouts which are placed transverse to the local groundwater flow, a high density dataset will be collected. Thus making it possible to follow and evaluate the pilot test in a non-destructive manner. Collected data will be a valuable contribution to the forthcoming remediation. 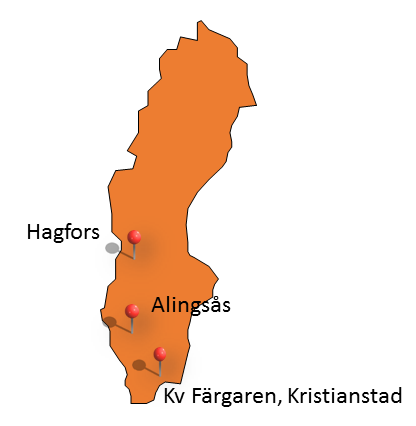